Australia, the US, & the TPP 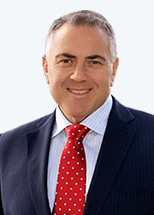 The Honorable Joe Hockey, Australia’s Ambassador to the U.S., has made the TPP a key focus in his work with Congress and the U.S. business community since his arrival in Washington in January 2016.  Prior to his appointment as ambassador, Hockey served as Treasurer of Australia and was very closely involved in negotiations of the Trans-Pacific Partnership trade agreement.

Ambassador Hockey has had a long and distinguished career in public service. He first entered Parliament in 1996 as the Member for North Sydney and spent more than seventeen years on the front bench. Prior to that he served as a Minister in a number of different portfolios including Financial Services, Small Business and Tourism, Human Services and Employment and Workplace Relations.

In 2013 Mr. Hockey was appointed Treasurer of the Commonwealth and was responsible for all economic policy including fiscal policy. He served as Chair of the G20 Finance Ministers and Central Bank Governors in 2014 and a member of the leadership troika in 2015. As Treasurer he was a regular delegate to the International Monetary Fund, World Bank, Asian Development Bank and APEC meetings.

Previously Mr. Hockey served as a banking and finance lawyer with a major Australian law firm. He graduated from the University of Sydney with Bachelor degrees in Arts and Law.