An In-Depth Look at an IVLP Experience 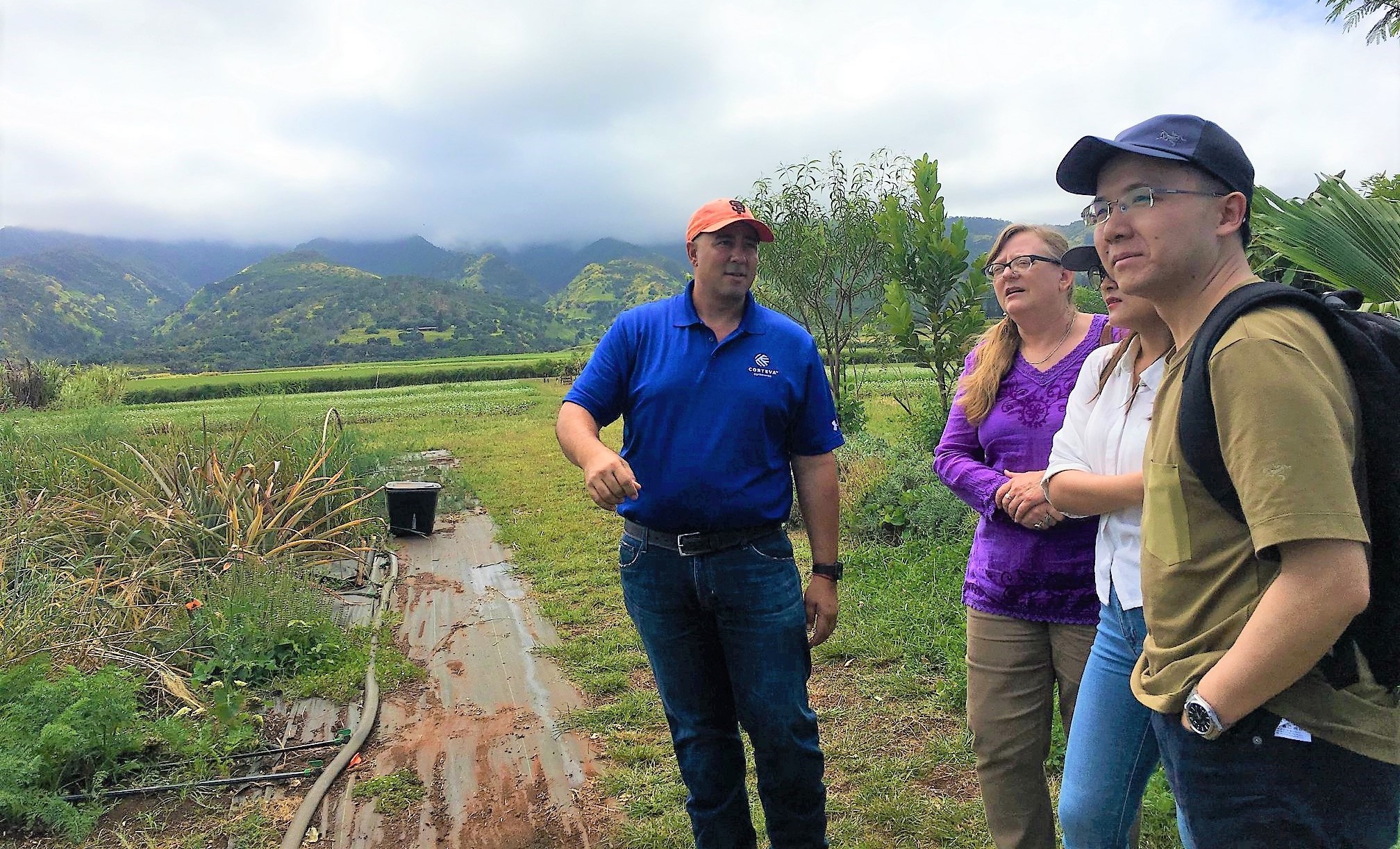 As they prepared for landing just miles away from Daniel K. Inouye International Airport, Chinese agriculture experts Dr. Rui Li and Ms. Rong Zhang encountered the State of Hawaiʻi’s Plant and Animals Declaration Form. Dr. Li and Ms. Zhang had spent the last two and a half weeks on the road, studying agriculture, food safety and security in the United States, meeting with American professional counterparts in Washington D.C., New York City, St. Louis, and New Orleans as part of their International Visitor Leadership Program (IVLP). In no other state were they asked about plants or animals they were carrying on their person.

Honolulu would serve as the final city-stop of their program, exposing them to Hawaiʻi’s rich agricultural history and the state’s unique position in the advancement of research, development, and production of certain crops deemed critical to sustaining resilient food supplies. From horticulturalist Dr. Richard Manshardt of the University of Hawaiʻi at Manoa’s Department of Tropical Plant and Soil Sciences, they learned that Hawaiʻi is susceptible to plant viruses and diseases, necessitating constant research and community commitment to protecting local crops. Dr. Manshardt spoke about Hawaiʻi’s papaya industry and the infamous ringspot virus that nearly eradicated the crop statewide in the early 1990s. Following a series of trials that utilized a variety of research techniques, Dr. Manshardt and his colleagues successfully improved the papaya’s resistance to the virus. Today, the papaya is enjoyed both locally and throughout the mainland, in Canada, and in Japan. 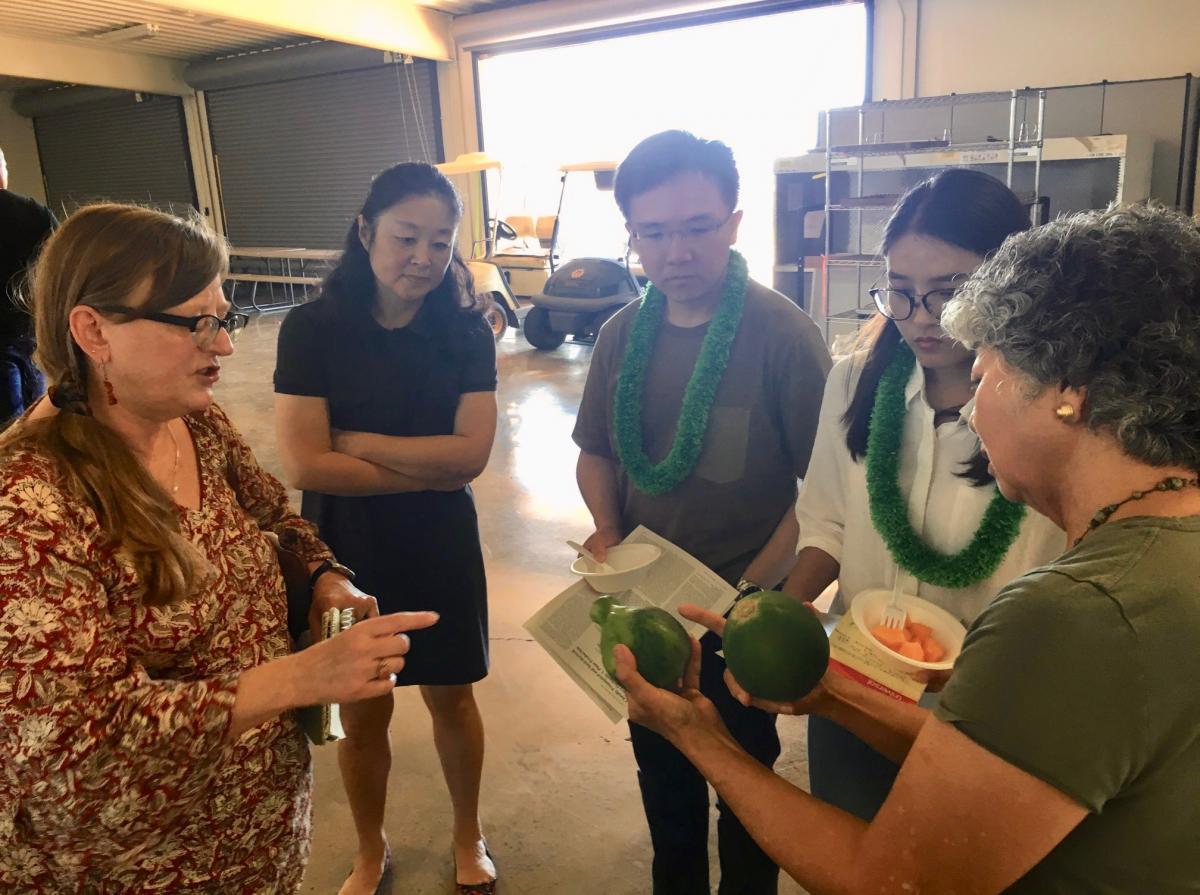 Dr. Li and Ms. Zhang would get to see, hold, and taste the same kind of papaya during their visit to the Hawaii Agriculture Research Center (HARC) in Kunia (pictured above). There, Ms. Stephanie Whalen and her team of researchers introduced the Chinese duo to the extensive research that is conducted locally to sustain other crops familiar and dear to Hawaiʻi residents. As it turned out, many of these crops were also familiar to Dr. Li and Ms. Zhang. They were surprised to learn that a variety of fruit in their native China shared an uncanny resemblance to an American variety that was, in fact, a different species altogether.

During the final meetings of their program with the Hawaii Crop Improvement Association, Bayer, and Corteva Agriscience (see featured photo of Mr. Alika Napier showing Corteva Agriscience land reserves for communal farming programs), Dr. Li and Ms. Zhang learned about Hawaiʻi’s modern agriculture industry and the sometimes contentious interactions between those that support, and those that oppose, the use of pesticides and genetic engineering in crops. Hawaiʻi serves as the focal point for this ongoing debate as its year-round tropical climate is advantageous for certain stages of seed production, accomplishing what the climate of other U.S. states and territories cannot. As Dr. Li and Ms. Zhang observed, Hawaiʻi is, and will continue to be, a necessary part of any conversation about American food security.

On the drive back to Honolulu from the North Shore, the duo reflected on their program and the diverse selection of city stops that had never ceased to mesmerize or pique curiosity. Cradling a papaya free of ringspots, they considered the common concerns that Chinese agriculture experts and the Chinese people share with their American counterparts. Recalling how delicious the papaya was during their earlier meeting, they decided they would enjoy it after they finished packing for their return home. As they explained, they now knew – and understood – why it wouldn’t be allowed on the plane.