Our Struggle is the Same: Papua New Guinea Parliamentarians Connect with Hawaiʻi 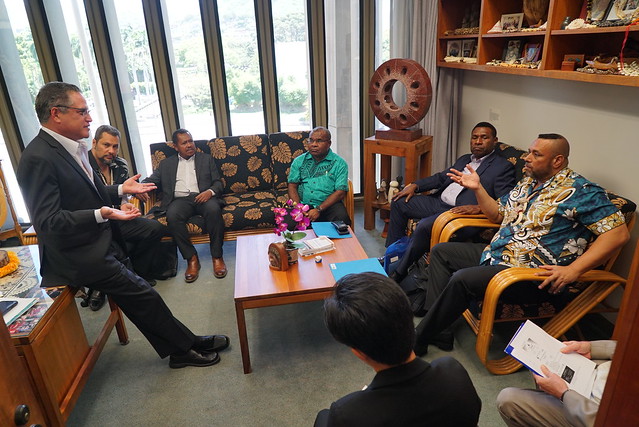 “My province lost an island last year and I had to relocate 600 families.  Our people are among the first refugees of climate change, their homes lost to rising sea levels.”

The room fell silent at these words, representatives from the City & County of Honolulu’s Resilience Office watching the speaker’s face intently that humid July afternoon.  For a moment, the faint roar of rush hour traffic was all that permeated the Kapalama Hale conference room.  The speaker’s colleagues, all fellow parliamentarians of Papua New Guinea’s (PNG) National Parliament, had averted their eyes, nodding their heads in weary commiseration.  Hon. Mr. Allan Bird, Member of Parliament for East Sepik Provincial Open, resumed.  “Everything we’ve just discussed… it resonates with us.  We see our roadways washing away.  I don’t think you can solve climate change from a local approach.  We are all either in it or not.”

3 weeks prior to their meeting with the Resilience Office, five parliamentarians representing the PNG Government arrived in Washington D.C. after a grueling 25-hour period of travel to begin their International Visitor Leadership Program (IVLP), “Democracy & Governance in the United States.”  The program sought to expose the parliamentarians to the principles of federalism in U.S. governance, the role of the three branches of government in state, local and tribal governance, U.S. foreign policy in Asia and the Pacific Islands, and U.S. efforts to address climate change.  Over the course of their ambitious 3-week itinerary, the delegation met with fellow civil servants and representatives from private, nonprofit, and academic sectors in Virginia, New Hampshire, Massachusetts, New Mexico, and finally Hawaii.  What they discovered was a complex nation bursting with unique narratives, histories, cultures, each city and individual whom they met with providing them with rich perspective about U.S. society.

While in Hawaiʻi, the delegation had the opportunity to meet and “talk story” with State Senators Karl Rhoads and J. Kalani English, discussing their common experiences as civil servants.  Parties discussed, among numerous topics, the increase in People’s Republic of China economic activity in the Pacific; the imminent rise of sea levels and what Hawaiʻi and PNG’s governments are doing to prepare for the future; the situation unfolding on Hawaiʻi Island’s Mauna Kea in the wake of the Thirty Meter Telescope breaking ground for construction; the importance of the revival, empowerment, and expansion of indigenous knowledge among Native Hawaiian communities; Hawaiʻi’s skyrocketing cost of living and dependence on tourism.

The delegation also met with representatives from the Pacific Tsunami Warning Center (PTWC) and the State Office of Elections.  As the parliamentarians explained, the PTWC is an invaluable resource in PNG, the de facto authority guiding decision-making in the wake of natural disasters.  Their visit to the Office of Elections was both motivating and frustrating, revealing the disparity between U.S. and PNG election processes.  As one parliamentarian explained to the Office, “In some counties, you have armed guards protecting [paper] ballot boxes.  People die during our elections.”  It would be a dream come true, they asserted, to one day provide ADA-compliant electronic voting machines at every PNG precinct voting location.

On the final day of their program, the delegation participated in a closing session to reflect on their journey and all they had observed, felt, and learned.  The session was facilitated by PAAC’s programming partners at the U.S. Department of State and Cultural Vistas (one of eight “National Program Agency” partners whom “Community Based Member” organizations such as PAAC routinely partner with to implement IVLP projects).  When asked about the impact that the overall program, individual cities, and individual interlocuters had on them, the delegation momentarily fell silent, just as they had at the Resilience Office.

“Sometimes when you look at systems, you get caught up in your own and forget about the bigger system.  You become so inward-looking.  [The U.S.] is self-sustaining.  But when it comes to climate change, it needs to engage the world.  Papua New Guinea is the same.  We have people who don’t care about climate change.  As we’re all cooking in this oven slowly, you realize that we all need each other.  We must engage.  We must start to look at each other.  What we’re doing is reacting.  And there is nothing strategic about that,” explained one parliamentarian.

“There’s sadness here that we can feel,” he continued.  “Climate change, the cost of living, the history, the fact that the people of Hawaiʻi cannot live in their own home.  What have we realized?  That our peoples’ struggle is the same.”