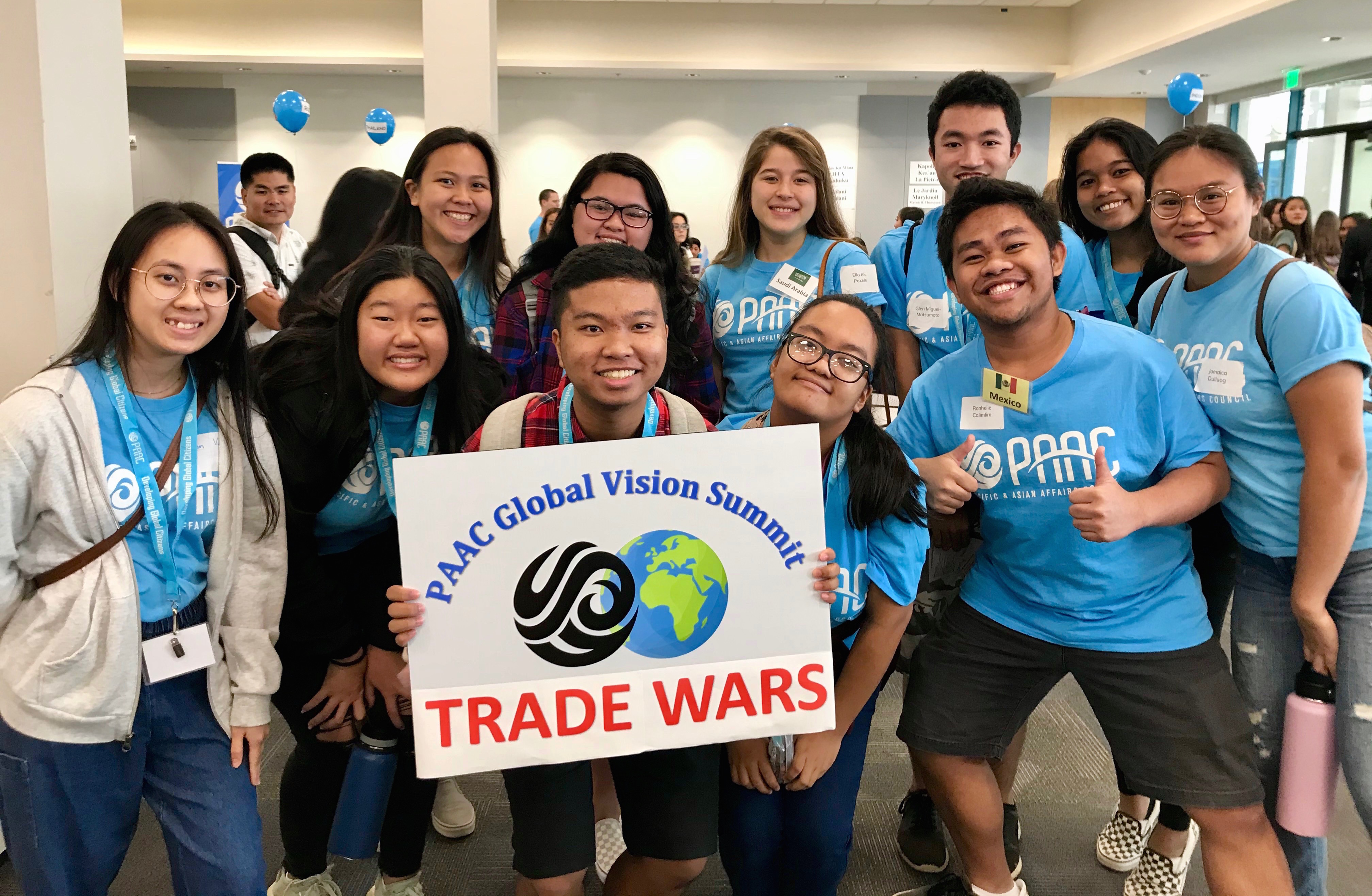 The trade war between the United States and China has dramatically impacted people and economies in both countries and around the world. But how many of us can say we understand how international trade “works”? And what effect, if any, do international trade agreements or policies have on businesses in Hawaii?

The conference featured an interactive International Trade Simulation developed using real export data from the United Nations. Students were divided into one of twelve countries and tasked with buying and selling commodities to meet their country’s import and export goals. Over three rounds of trading, participants learned about imports and exports, adapted to global events and fluctuations in global supply and demand, and experienced first-hand how tariffs and the U.S.-China Trade War impact global trade.

The complexity and dynamism of international trade was an important takeaway for many. “World trade is INCREDIBLY complex and difficult. It is also not very straightforward at all, even when simplified” one student commented. The constant interaction and negotiation also illuminated the importance of human relationships. “There is a lot of politics involved in trade agreements,” another reflected. 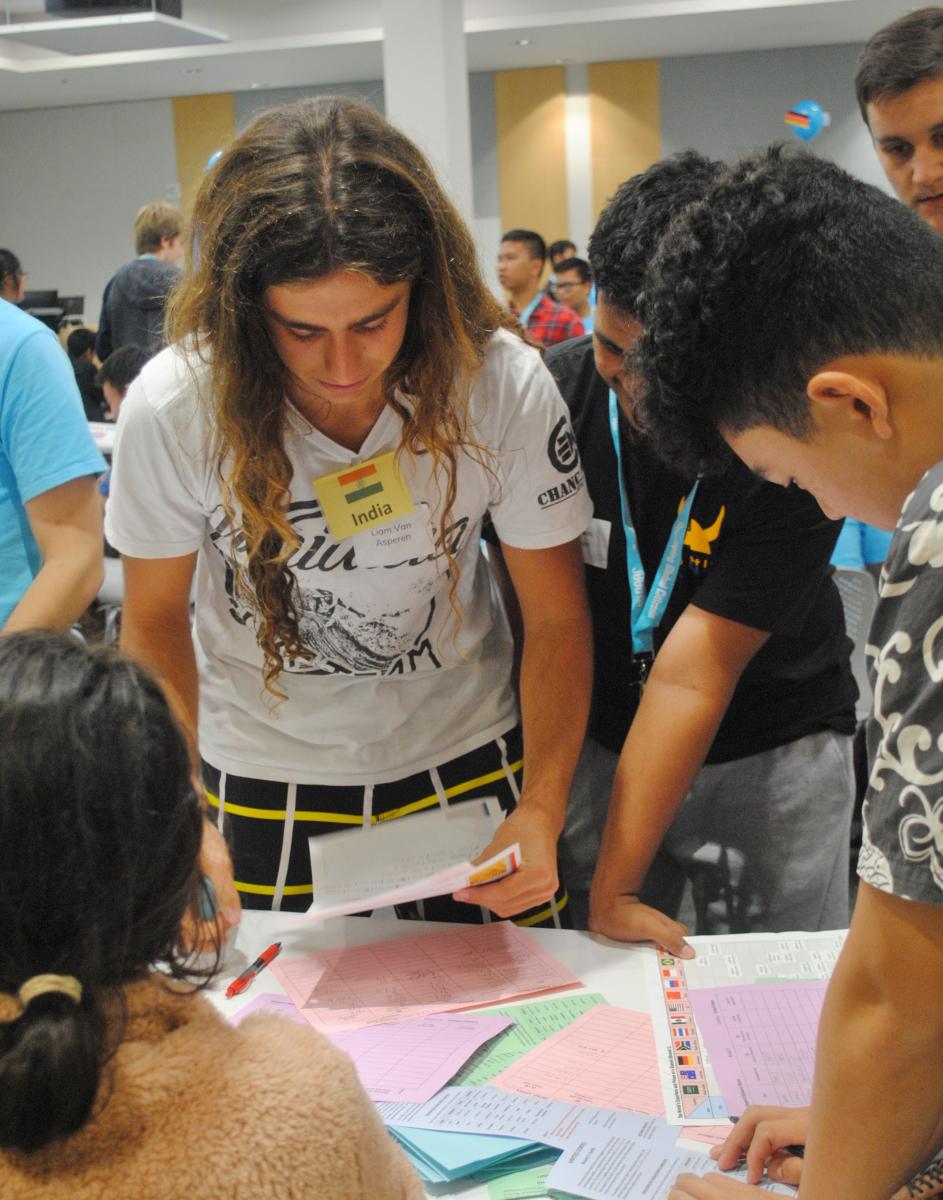 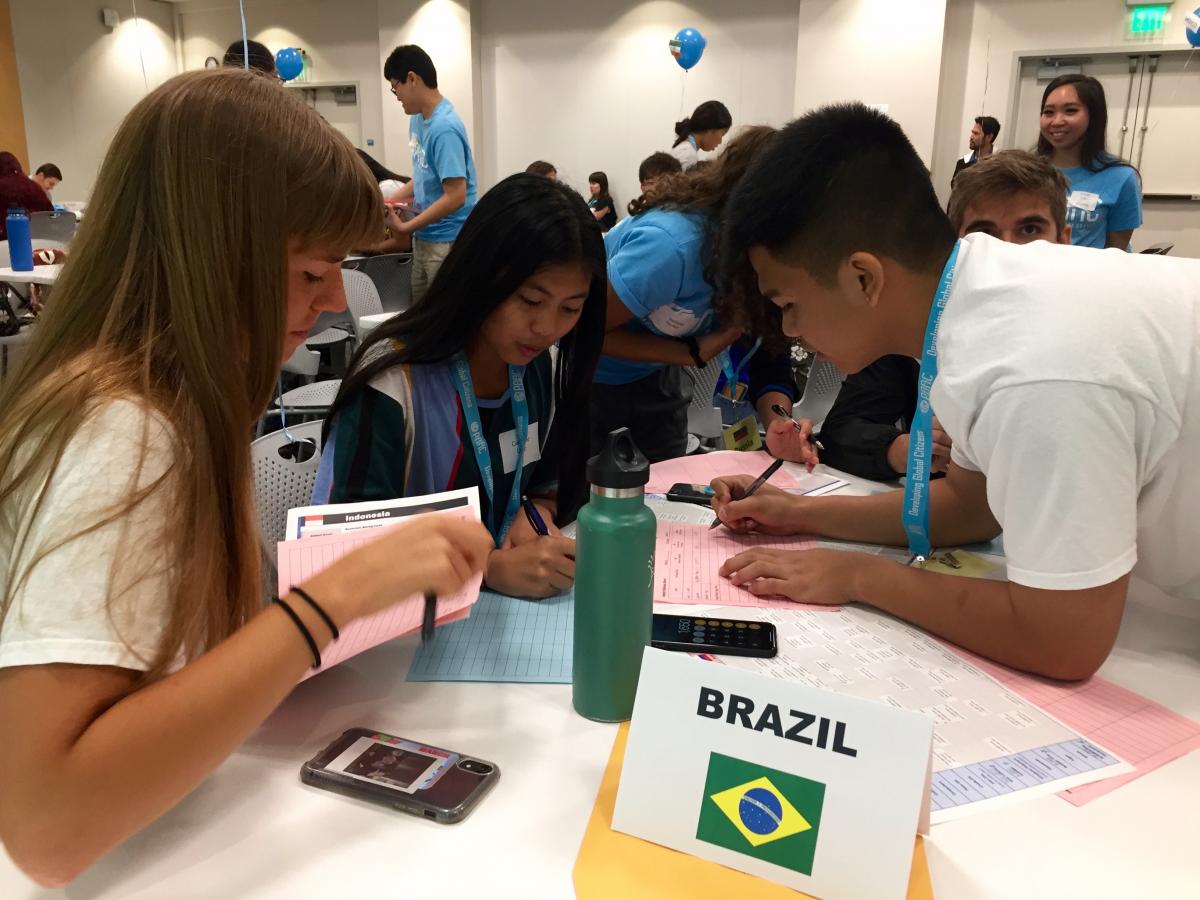 During the simulation, country teams had the opportunity to adjust national production levels and prices to better match global supply and demand. Countries were also forced to adjust to various economic, social, political, and environmental factors, including tariffs, wildfires, and labor strikes. Students quickly saw how events in other countries impacted how successfully they could achieve their national trade goals. One student aptly observed, “Trade wars affect not only the countries in the [U.S.-China trade] war but also other countries as well.”

Following the activity, students debriefed with a panel of trade experts who drew parallels between the simulation and international trade in the real world. The panel included Mr. Steven Craven (former consultant, American diplomat, and U.S. trade negotiator), Dr. Kristi Govella (Assistant Professor at the University of Hawaii at Manoa's Asian Studies Program who specializes in trade policy, among other topics), and Mr. Mark Elwell (businessman, experienced importer, and Owner and Operator of Bamboo Flooring Hawaii). 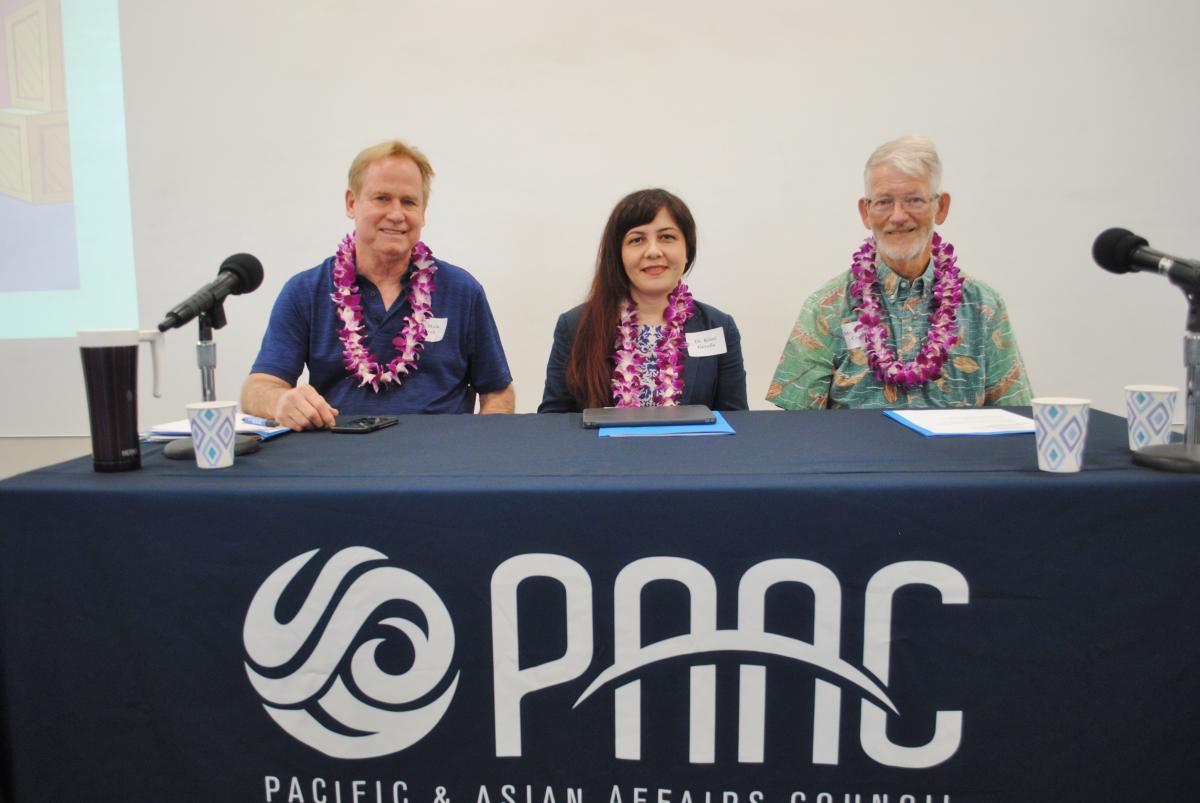 Speaking from experience, Mr. Elwell explained how U.S. tariffs on imported Chinese goods have dramatically increased costs and negatively impacted his business. The takeaway was clear: although international trade policies may not seem, at first glance, to affect us in Hawaii, a closer look reveals that local businesses are directly impacted by and vulnerable to international trade barriers and policies.

Held every semester, PAAC’s Global Vision Summits inform young leaders about important international issues and how they relate to Hawaii. This semester’s theme was not only timely, but unique. “In covering international trade and the ongoing trade wars, we wanted to direct students’ attention to one of the underlying economic structures of our interconnected world,” said Erica Nakanishi-Stanis, PAAC’s Study Tour Director who co-facilitated the event.

In contrast to traditional lecture-based conferences, Global Vision Summits emphasize interaction and challenge students to practice crucial 21st century skills. This simulation required students to develop and independently carry out an informed strategy, collaborate and communicate effectively within and amongst groups, and quickly analyze information. A post-conference survey revealed that critical thinking, interpersonal skills, collaboration and teamwork, and problem solving were the skills students reported using the most. 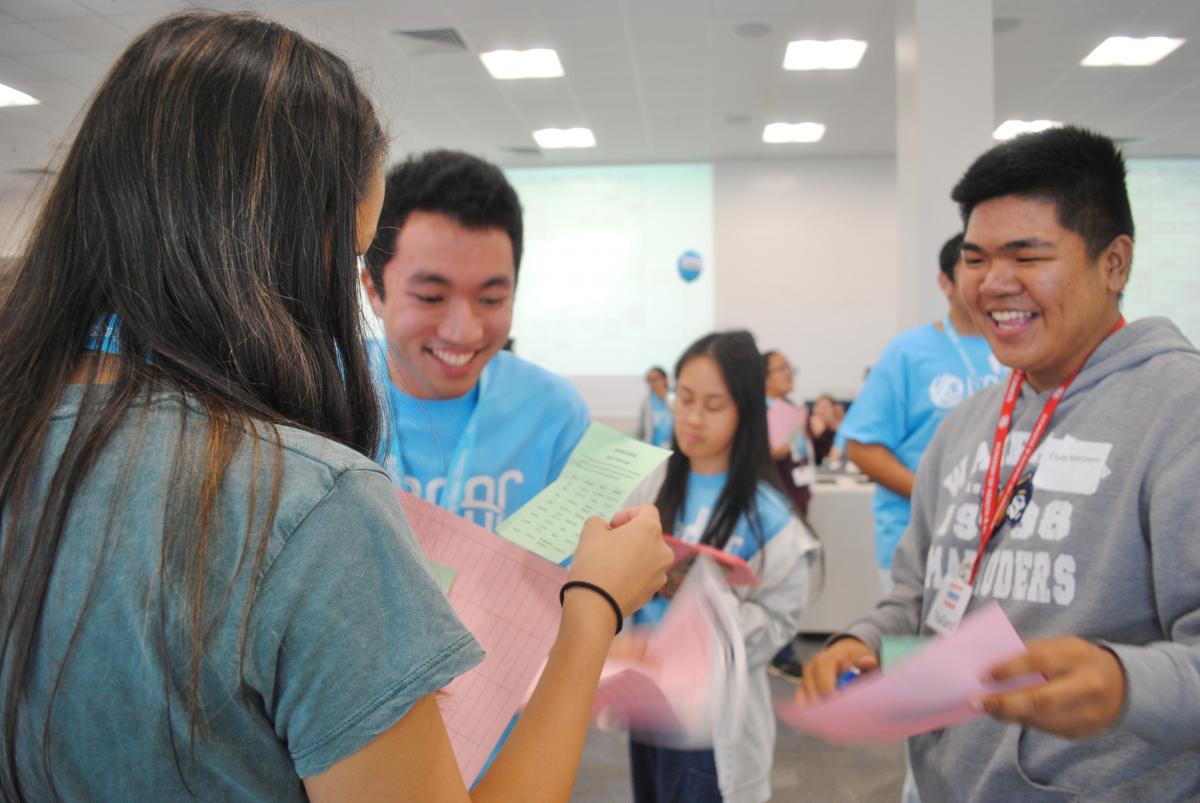 “This was super fun and educational,” wrote one student, sharing what appeared to be a common sentiment. “I learned a lot and came out with a smile on my face. I would definitely recommend this to any high school.”  Meeting new people and making new friends continues to be a highlight of the conference for students year after year.

“Some club members who usually don’t like much social interaction threw themselves into the simulation with a vigor not expected. But that’s just what happens when you have to work in a team you’re not familiar with,” said Fa Chanthalangsy, PAAC Club Founder and Co-President at Keaau High School in Hilo. She and her fellow club members fundraised to fly to Oahu to participate in the summit. An alumni of PAAC’s Global Leadership Program, Ms. Chanthalangsy has participated in several GVS’s over two years and has seen their impact. “It’s clear that these sort of events spark a passion in students even they might not know they have.”

View more pictures from this event in our Gallery.